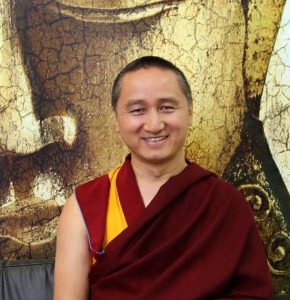 He was born in 1972, in Tsum Valley, Nepal. At the age of 3, Geshe Lama Konchok became his tutor and spiritual guide, and gave him numerous teachings and commentaries on both Sutra and Tantra texts. Geshe Tenzin Zopa became his closest disciple, and then his assistant and translator until his passing, in 2001.

In 1984, at the age of 12, he was ordained in Kopan Monastery, in Nepal, and there he studied Tibetan, English, Nepali, Art, lama dance, rituals, pujas and Buddhist philosophy. In 1990 he entered Sera Jey Monastic University, in India, for extensive studies in Tibetan Buddhism and Philosophy, graduating as Geshe (equivalent to a PhD title in Buddhist philosophy) in 2007.

Having received teachings from great reputable lamas of different lineages, Geshe Tenzin Zopa is currently working for his master, Lama Zopa Rinpoche, teaching extensively all over the world —in Europe, the Indian subcontinent, Asia and Australia. He was the resident teacher at the Losang Dragpa Center in Malaysia, as well as the Dharma advisor at the Kasih Hospice Care Society and at the Rinchen Jangsem Ling Dharma Society retreat centre, both part of the FPMT.

He is responsible for several projects, including Rachen Nunnery, Mu Monastery (in Tsum, Nepal) and the 1000 Buddha Relic Stupa at Kopan Monastery (Nepal).

Author of twelve books, he currently lives in Australia, where he is involved in many projects and follows the advice of Lama Zopa Rinpoche in the teachings on Dharma he offers all around the world.

In February 2019, the World Peace Congress gave him the prestigious Global Peace Leadership and Excellence Award for his leadership and contribution to society. 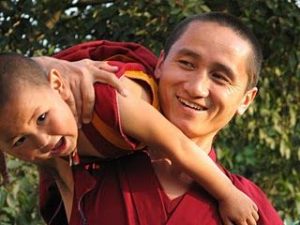